Gyo: Tokyo Fish Attack is a 2012 horror anime based on the titular manga by Junji Ito (Tomie) that ran from 2001 to 2002. Arguably the only creature feature anime available in the UK, the OVA was written and directed by Takayuki Hirao and wins the award for being the most bizarre concepts I have ever seen for a Sci-Fi Horror film. Gracefully short at a mere 71 minutes long, Gyo was produced by the Ufotable animation studio and was released in the UK via Terracotta Distribution.

Kaori is on holiday with her friends when walking fish begin to rise from the sea and invade Japan, bringing with them a ‘death stench’ that smells like rotting corpses. Leaving her friends at the vacation home, Kaori teams up with cameraman and reporter Shirakawa as she struggles to make her way back to Tokyo and find her finance Tadashi. This is where things start to get really weird…

The invading fish appear to have evolved bio-mechanical legs that pass on a virus when they bite or scratch a human. The virus bloats and discolours the bodies of the victims and causes large quantities of the death stench to begin emitting from their orifices. After a short while the fish explode and the biomechanical legs expand and attach themselves onto the humans who have bloated to the point where they cannot walk. The legs have living tubes that attach themselves to the human’s orifices and uses the death stench to power the legs via a form of hydraulics…

And the legs have canons that fire excrement…

And there’s one that can fly…

Unsurprisingly with so many different story elements, very little time is spent expanding on any of them. It is mentioned that the virus may have been the result of military testing during WWII but that seems to get forgotten fairly quickly. The film requires the audience to ‘just roll with it’ whilst it continues to introduce new dimensions to the epidemic.

The animation is overall pretty good, the art style is very grounded in reality so there are no exaggerated limbs or facial expressions and even the monsters themselves seem to adhere to the laws of physics like any realistic creature would. The walkers are horribly grotesque to the degree of being creepy and revolting which is, I guess, exactly how they should be. I was initially shocked by the amount of gore being a lot higher than what I had expected; feet get pierced, ear lobes get ripped off and the blood and guts spray from the exploding fish corpses.  The sound design beautifully captures of all the disgusting noises, from the metal clang of the legs to the schools of walking fish running through the city. However, Gyo does commit the cardinal sin of making the Sharks roar like bears a la Jaws: The Revenge.

The characters in Gyo are well-defined if not a little extreme. Kaori is a kind and selfless person who is willing to risk life and limb to find her fiancé Tadashi, even continuing to try and reconcile with him after he has become a grotesque walker. Erika is self-centred and promiscuous, defying the wishes of Kaori by inviting two boys over and then engaging in a threesome with them whilst the fish invasion continues on around them. Aki is shy, self-conscious and emotionally damaged as she ignores guys in order to continue eating and whilst Kaori goes after Tadashi and Erika enjoys her liaison upstairs , she rocks back and forth in the foetal position berating her friends for ‘betraying’ and ‘abandoning’ her, stating that they should ‘die, die, die.’ The male characters don’t fare much better. In what little we see of Tadashi he is a reasonable and nice guy, Shirakawa is a nice guy with his own agenda and Dr Koyanagi is our brilliant but slightly insane scientist and exposition dump.  Although the characters are fairly two-dimensional and lack emotional depth, they are never bland or boring; entertaining rather than relatable. 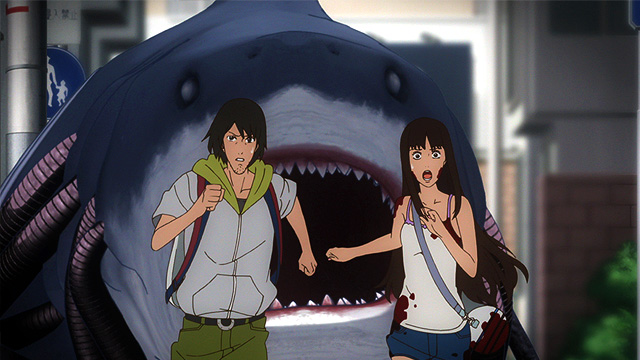 Shirakawa and Kaori run from the Shark Walker

From what I can tell, the voice acting is good. There is no English dub on the DVD so the choices are either Japanese audio with or without English subtitles. I don’t speak Japanese nor watch subbed anime to a great degree so I don’t feel like I can really comment much on the matter but the actor’s emotional tone seemed to suit what the visuals were portraying and there were never any goofy or out-of-place moments. I tried to research other projects that the voice actors had been involved in but I found very little information and what I did find isn’t worth mentioning.

During my research I discovered the one major difference between the manga and the anime is that Tadashi and Kaori completely swap personalities and roles, everything from immunity to the Citrus Circus. However being that I never read manga, that is all I’m going to say on the matter.

Ultimately I am left with very little to say about Gyo: Tokyo Fish Attack. With so many big ideas that just aren’t followed through and a bunch of paperthin character, Gyo ends up feeling rather hollow. Almost like a Part 1 to a heroic Part 2, where Kaori discovers the truth behind the plague and develops a cure.

However I would heavily recommend this film as you will never, ever, ever see a creature feature with such a bizarre concept and storyline in your entire life. It may not be as rewarding as you may like and may lack a satisfying ending but Gyo: Tokyo Fish Attack is bold,original and different – for better or for worse.

*I cannot stress enough that I am really not a fan of anime, I’ve watched a little bit but certainly not enough to consider myself an aficionado.

All pictures are copyright and owned by the Ufotable Animation Studio, Aniplex and Terracotta Distribution.

All I own is the words.