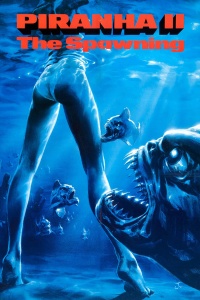 When constructing a list of the most influential film-makers in history, it would be hard to overlook James Cameron. The multi-award winning writer/ director has created some of the most creative, thrilling and financially successful films in living memory including The Terminator, Aliens, Terminator 2, Titanic and Avatar.

Yet the famously hard to work with Canadian who single-handedly ushered in the new era of stereoscopic 3D, came from rather humble beginnings. Like many successful industry professionals today, Cameron was a graduate of “The Corman Film School” and began his career as a model maker and SFX cameraman for Roger Corman’s New World Pictures production company. It was his work for Corman which would lead to his big break and debut directorial gig.

The film in question was Piranha II: The Spawning and this is the story of James Cameron and his fishy first feature film.

A scuba diver instructor must team up with her biochemist boyfriend and her police chief ex-husband in order to get to the bottom of a series of mysterious murders. However, their investigation leads them to a sunken ship in the Caribbean Sea which is home to a swarm of mutated flying piranha!

Although this story doesn’t start with Cameron; instead, and like a lot of creature feature stories, it begins with Jaws. 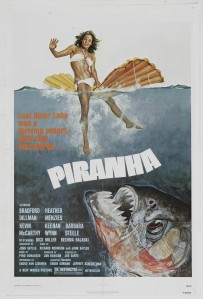 In 1975, Steven Spielberg’s Jaws was an unbelievably tremendous hit and was changing the film-making landscape. The ‘genre’ film was critically and commercially acclaimed, even taking home three Academy Awards but like all things that are successful, Jaws was followed by a horde of cheap rip-offs and cash-ins. Every deadly animal imaginable was receiving a Jaws-inspired creature feature.

Inevitably, it was the turn of piranhas and producers Jeff Schechtman and Chako van Leeuwen had a piranha-based script (written by Kingdom of the Spiders scribe Richard Robinson) which they were trying to get made. Naturally, they sought funding from Roger Corman who agreed and asked his young employee Joe Dante to direct the film.

Years before he found acclaim for hits like Gremlins, The Howling, Gremlins 2 and Small Soldiers, Joe Dante was working at the trailer department for New World Pictures and with only a tiny budgeted directorial début to his name, Dante jumped at the chance to direct the picture. However, he was unenthusiastic about the script so Corman hired future multi-Academy Award nominee John Sayles to re-write it.

Sayles re-wrote the script as a tongue-in-cheek parody of Jaws wherein a riverside entertainment park is invaded by a swarm of mutant piranhas. With a fantastic script in place, Dante went ahead and made the best film he could with the very limited resources he was supplied with. Eventually the film was shot, edited and ready to be released nearly 3 years after the film it was trying to spoof and two month after its very serious sequel.

But despite being released whilst Jaws 2 was still in theatres, Piranha was a huge success which came as a surprise to everyone, including Dante and Corman, and a sequel was quickly put into pre-production. However due to a non-exclusive contract , van Leeuwen and Schechtman were able to look for financing elsewhere and decided to part ways with Roger Corman and New World Pictures.

Instead they met with Tentacles director Ovidio G Assonitis who agreed to serve as a producer on the project and managed to raise the production budget. According to Assonitis, the majority of the money came from Warner Brothers on the condition that the Piranhas must become airborne in the sequel.

Van Leeuwen and Shechtman originally offered the directing job to Miller Drake, Corman’s head of post-production who had previously worked alongside Joe Dante at New World Pictures. Drake pitched a plot that brought Dr Robert Hoak back to life (although ‘chewed and mutilated’) who would then create the flying piranha as a revenge for what happens to his beloved mutant piranha in the first film.

Drake was hired and began developing a script with Charles H Eglee. However Assonitis wasn’t convinced that Drake was right for the director’s chair and whilst trying to secure the return of SFX make-up artist Rob Bottin from the first film, Drake was let go. Interestingly from a creature feature perspective, Drake would later work on Alligator whilst Bottin would later work on Dante’s The Howling and octopus-based thriller Deep Rising.

However this rather large hole in their production was soon filled by the production’s Canadian Art Director, a young man named James Cameron. Also a former New World Pictures employee, Cameron had served as the Second Unit Director on the set of Corman’s Galaxy of Terror where he had impressed many with his ingenuity over the ‘maggots’ story.

Whilst filming a seemingly simple scene, Cameron was having trouble with maggots on a prosthetic arm that wouldn’t wiggle as he needed them to. His solution was to run an electrical charge through the prosthetic arm which made the maggots squirm on cue.

Cameron had been hired as Piranha 2’s Art Director by Miller Drake and was determined to gain the former director’s approval before accepting the offer. Drake encouraged Cameron to take the job.

So James Cameron signed on the dotted line and was flown over to Jamaica to begin shooting, editing the script as he went. The shoot was not an easy one though as the insufficient budget constantly plagued production. 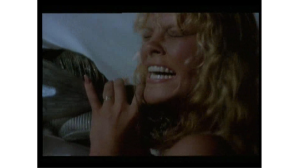 Among the on-set horror stories are an Italian crew that couldn’t speak English, shooting in a real morgue with genuine corpses, Lance Henrikson buying his own costume from a waiter for $75 and Cameron himself spending entire nights in his hotel room making more plastic piranha. Despite the constant setbacks, the cast were very impressed with the committed young director.

More importantly, the only unhappy person was the man with the money. Assonitis grew increasingly dissatisfied with the first time director’s performance and two weeks into the production, future multi-Academy Award winning director James Cameron was fired from his first feature film. Piranha 2 was running was running way over budget at this point and Assonitis felt that Cameron was making inexperienced mistakes which were only making his money woes worse.

Despite the language barrier (an Italian director speaking English to Jamaican extras), the filming was completed. Officially wrapped, Assonitis headed to Italy to begin post-production. Also on his way to Rome, however, was James Cameron.

It has long been rumoured that Cameron broke into the editing suite at night to re-edit the film to what he originally had in mind but was caught in the act and the film was re-cut. This is an untrue story that began in an unofficial James Cameron biography but has since become film-making legend.

In actuality, Assonitis had the film edited and completed; creating what we shall call the producer’s cut. Although he had been fired after only two weeks, Cameron was still going to be credited as the sole director as a contractual agreement meant that the film couldn’t be released with an Italian director.

In light of this, Cameron made a deal with the US distributors that would allow him to re-edit and re-score the producer’s cut for US audiences in the hope of returning the film that bore his name to being closer to his original vision. Thus he created the director’s cut which runs at 84 minutes compared to the longer producers cut which runs at 94 minutes.

The most notable difference comes in the form of several red-tinted piranha POV shots which are non-existent in the producer’s cut. These shots are reminiscent of several shots in The Terminator, the idea for which grew from Cameron’s stay in Rome. The young director was extremely unwell throughout the editing process and during a depression-fuelled fever; experienced a nightmare about machine men with glowing red eyes.

Many sources claim that Piranha 2 was a box office flop yet Assonitis claims that he made money out of the venture and Cameron claims that the US distributor also turned a profit off of his cut. Regardless the film made very little impact and soon as Cameron hit it big as the writer/ director of The Terminator in 1984, Piranha 2 was long forgotten.

Sadly the director’s cut has also been long forgotten as, from what I could find in my research, all DVD releases available today are of the producer’s cut. If anyone is in possession of the director’s cut then please get in touch.

After the disappointment of Piranha 2, the series was put on hold. A TV movie remake of the original was produced in 1995 but the tone of the film was vastly different and it’s only notable for being the acting début of Mila Kunis.

However in 2010, the franchise returned with the remarkably successful Piranha 3D directed by Alexandre Aja and post-converted into James Cameron’s new stereoscopic 3D. Piranha 3D was surprisingly well received by critics and remains a modern classic in the creature feature library. In 2012, the sequel Piranha 3DD was released and despite my personal feelings on the matter, the film was neither critically nor commercially successful.

So once again the franchise is on hold but that doesn’t take away the fact that this is a rich franchise with an interesting history and hours of great creature feature action. The story of Piranha 2 may be the most interesting chapter so far but something tells me that this story is far from over. The Piranhas will return one day and not just in James Cameron’s nightmares.