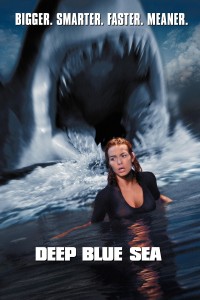 Believing that sharks hold the key to curing Alzheimer’s, a team of scientists chemically increase the brain matter of three sharks for their research. Unfortunately this also make the sharks super intelligent and they soon begin a deadly siege of the scientist’s underwater lab…

With its huge budget and great cast, Deep Blue Sea is a fantastically fun adventure but the real stars of the shows are the outstanding animatronic sharks.

Despite being made back in 1999, I am going to stick my neck out and say that Deep Blue Sea has some of the best creature animatronics in any movie – ever. Having these giant robotic sharks that can swim and interact with actors makes a huge difference and creates some staggering sequences and especially memorable death scenes. CGI is still used for the more outrageous shots but the degree of physicality in the shots with the animatronic is, in my opinion, unmatched by any other creature feature past, present and future.

The animatronic Sharks are one part of the production design which is Deep Blue Sea’s biggest strength. Aquatica, the underwater laboratory, looks really cool including the above water site which, accurately described by Samuel L Jackson, looks like a floating prison. The corridors and shafts look like they’re taken from a spaceship whilst some of the rooms are reminiscent of submarines compartments which when blended together, create a unique retrofitted WWII bunker aesthetic. The crème de la crème, however, is the Wet Lab which is a glorious feat of design with its loading platform, the computer equipment on huge swinging arms and the giant glass window.

Aquatica is my one of my favourite film locations and not just because of the design, but because it solves one of the key problems with killer shark films. Sharks are stuck in the ocean which makes them very easy to avoid but trapping the characters underwater with the sharks creates a real sense of claustrophobic tension and it makes for a far more emotive movie experience.

Deep Blue Sea is one of the few creature features to have a theme song with ‘Deepest Bluest’ by rapper LL Cool J, who also stars as Preacher. However, unlike the titular theme songs for Zombeavers, Sharktopus and Piranhaconda, ‘Deepest Bluest’ is neither catchy nor fun and the lyrics are a little confusing (turns out the line ‘My hat is like a shark’s fin’ is taken from a reference to Jaws in one of his earlier songs).

Deep Blue Sea is one of the best killer shark films around. The acting is great and the storyline is interesting but it’s the practical work that really shines. The flooding effects and the animatronics are unmatched, the visuals are unforgettable and Deep Blue Sea contains one of the most unexpected movie deaths in celluloid history.