The horror comedy sub-genre is one of the most difficult balances to achieve on film. Too funny and there is zero tension in the scarier scenes. Too scary and the tonal shifts into comedy ruin the suspension of disbelief.

One of the best example of a great horror comedy is last year’s Zombeavers (review here). One thing that caught my eye in particular was that the film’s screenwriters were also the composers.

Music and screenplays were two fields that I was certain had little to no crossover and I was fascinated about how these guys could be so skilled in two completely different crafts.

So the best way to find out was to chat with the immensely talented Jon and Al Kaplan who, as well as writing and scoring Zombeavers, also served musical duties on Dinocroc vs Supergator, Gila and Piranhaconda.

Read on for our conversation where we discuss how to score a movie, musical influences, Zombeavers 2, other creature feature ideas and the fantastically titled The Hills Have Thighs…

[JS] Let’s start from the beginning; how and why did you get into composing / screenwriting?

[J+AK] Our dad was a concert composer (at least while he was at Manhattan School of Music), and he introduced us to film music right from when we were born. We’ve been composing since we were kids, and while we never thought of it as a career path to start, we ended up doing the USC film scoring program. That still didn’t lead to a career in composing, so we tried screenwriting as a different creative avenue. Then we were looking for ways to combine music and writing, so we did Silence! The Musical. Eventually, we ended up writing Zombeavers because we wanted something new to score. 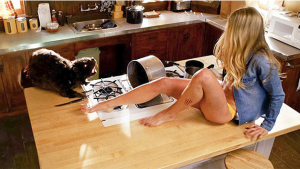 How did you get involved in the Zombeavers project?

Al came up with the idea for Zombeavers many years ago. More recently, our writing partner Jordan Rubin was looking to get a movie made. He liked the pitch, and we started writing the script almost immediately. After Jordan got the movie set up, we met with the producers to pitch ourselves as the composers too, and fortunately it worked out.

What was the most difficult part of writing the film?

It was pretty fun and easy to write—it almost wrote itself. And then, during shooting, it rewrote itself! (Through improv.)

We were not involved in the production process, though we did visit the set several times. It did feel weird to “stop” being involved and then start up again with the music, but that’s the way it works with writers!

I must admit that of all the film-making processes, composing is perhaps the one that I know the least about. Could you succinctly explain what the process entails, how long it takes, what constraints and limitations you face, what you get out of it etc.? 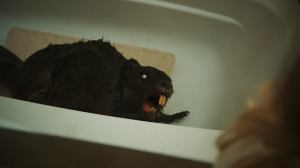 Composers spot the movie, which is watching it with the director and deciding where and why music is needed. Then the composers usually come up with core materials, which then must be approved by the director and any other powers that be. In the old days, that was pretty much it. The composer was trusted to go off and write the score, and after his approximate 3-6 week window was over, there would be a recording session with an orchestra, and that’s where the filmmakers would get to see the result—and they’d usually have to live with whatever it was, unless they truly hated it and had the money to commission a brand new replacement score at the 11th hour. Today, every single step in the process must be approved from start to finish, with each cue demoed on sampled instruments, placed to picture (whether locked or otherwise) and signed off on by the director before live players are brought in to do recordings. On something like Zombeavers, there was a little more creative freedom because of our relationship with Jordan.

As for what we get out of it specifically, we’ve written in all kinds of mediums—music, comedy songs, feature scripts, books for musicals, you name it—but writing music to picture is probably the most creatively fulfilling thing we’ve ever done. Especially when it’s for the kind of movie that can still hold an active, noticeable score. To us, film music in general is the next great step in the evolution of orchestral music. Most of it may be crap, but you could say that about any other art form as well. The roughest things right now are the growing collaborative element and the rigorous approval process that stifles creativity, and the fact that digital editing has made it virtually impossible for composers to get a locked picture to score to. We’d like to say that’s going to get better, but it isn’t.

When I was listening to soundtrack, I found that I was reminded of the Friday the 13th series soundtracks; were there any film soundtracks or other composers in particular that inspired or influenced you when composing for Zombeavers? 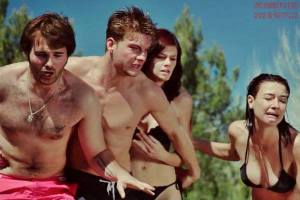 Not Friday the 13th specifically, though in retrospect, we can hear a similarity with the small string ensemble playing dissonant material, if that’s the stuff you mean. But yes, there were lots of works that inspired us, from both concert composers to film composers. The most prominent film music guys would be Jerry Goldsmith (Poltergeist), Arthur B. Rubinstein (Blue Thunder) and John Harrison (Day of the Dead).

All of those films have a very different tone to Zombeavers, how did you approach composing for those films compared to this one?

For Dinocroc, we only did the main theme and a few variations on it that were tracked around the picture. Piranhaconda was a more extensive job, but also involved considerable tracking. Zombeavers was a more routine scoring experience from start to finish, but the approach wasn’t all that different, at least as far as the musical tone went. We played all of them relatively straight, as is often best when approached any kind of comedy. Zombeavers did have a throwback element courtesy of the ’80s electronics, while Dinocroc had the Morricone/Barry-esque influences because the director preferred that style.

Let’s be brutally honest, which do you prefer: screenwriting or composing? Or is that a stupid question because the two fields are far too different to compare?

Our answer depends upon who’s asking the question, and where our heads are at in any given year. The process of screenwriting is much easier, and it’s also easier to get notes on a script, because they’re generally easy to understand, even if you don’t always agree with them. It can be very difficult to translate notes about film music, because filmmakers usually don’t speak in musical terms—and the whole point of music is that it says what can’t be said with words anyway. Creatively we prefer film music, but both are fulfilling in their own ways.

Ignoring all budget, logic and practicalities for a moment, if you could make a movie about any creature, which creature would you choose?

For the record, I would choose a movie about Killer Rhinoceros or at the very least some form of Mega Panda.

We’ve wanted to do Volcowno (about genetically-engineered killer cows in Hawaii) for a while and we have a treatment for it that no one will ever make because of the budget. We also think they should do Zombeavers 2.

What is your favourite creature feature?

That’s a tough one. If Jaws counts, then Jaws. If not, then maybe Rogue, by Greg McLean. Gremlins is great too, mostly because of the music.

Would you ever return to creature features? 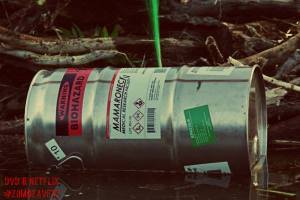 Absolutely! They’re fun all around.

What have you got coming up in the future?

We have a bunch of scripts in development, but they take forever and often never happen. We’re about to start writing another one with Jordan too. We have a couple of musical things underway as well. When we’re not getting paid for something, we’re still always working on our YouTube Legolambs songs, until we can’t stand it anymore.

A big thank you to Jon and Al Kaplan for answering my questions and if you want to find out what they’ll be up to next, you can visit their official website here.

For more information on Zombeavers, you can check out its profile in the Creature Catalogue here or my review here.