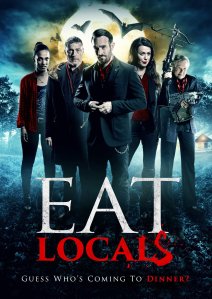 “In a quiet countryside farmhouse, Britain’s vampires gather for their once-every-fifty-years meeting. Joining them are a detachment of Special Forces vampire killers who have bitten off more than they can chew. This is certainly going to be a night to remember… and for some of them it will be their last.”

It’s a great concept and the film certainly takes it’s time in establishing its interesting lore. Flemyng proves himself as a competent director, getting great performances out of his very talented cast. All of whom manage to lift the material to a more enjoyable level. The standout performance is from Tony Curran who stars as the caustic and impeccable dressed vampire, Peter Boniface.

But despite an enthusiastic cast and clearly passionate film-making, this horror comedy is surprisingly light on laughs and scares. This leads to a degree of tonal inconsistency that occasionally left me perplexed at whether I was supposed to be laughing or not. Even the film seemingly gives up on the horror and the comedy to pursue an action heavy finale.

This includes the highlight of the film which is a particularly exhilarating action set piece that occurs around the 1 hour mark. Obviously influenced by Matthew Vaughn’s single-take floating camera style, the sequence features Star Wars stuntman Lukaz Leong takes on a squad of soldiers on his lonesome. Albeit brief, this fun scene helps add some much needed life into the picture and it’s worth nothing that Hollywood hard man and all-round cockney geezer Jason Statham was the Fight Consultant.

All in all, there’s plenty of enjoyment to be found in Eat Locals’ game cast, good SFX and entertaining action, just don’t expect a laugh-a-minute comedy riot or a nail-biting hide behind the couch spooky thriller.