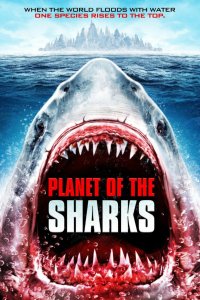 It’s that time of year again! To celebrate Halloween this year, Creature Feature Corner is running 1 competition a day up until October 31st. That gives you 7 chances to win!

In conjunction with Kaleidoscope Home Entertainment, Creature Feature Corner is giving you the chance to win a DVD copy of the futuristic shark terror, Planet of the Sharks!

“In the near future, glacial melting has covered ninety-eight percent of Earth’s landmass. Sharks have flourished, and now dominate the planet, operating as one massive school led by a mutated alpha shark.”

To enter the competition, just answer this simple question:

What is the name of the BBC’s oceanic documentary series that started earlier this week??
a) Blue Planet: The Revenge
b) Blue Planet 2
c) Blue Planet: My Hat Ls Like A Shark’s Fin

To enter, email your name and mailing address to: josh@creaturefeaturecorner.com – with the subject heading being your answer – before October 31st 2017. All entries will go into a draw and a lucky winner will be selected at random to win a copy of the DVD. Also don’t forget to Like Us On Facebook or Follow Us On Twitter to catch all the latest news on future competitions.

DISCLAIMER: This competition is available worldwide but the DVD’s are Region 2/PAL. Apologies to our non-PAL Region visitors. The competition will close Tuesday 31st October 2017 at 23:59 GMT. Full T&C’s can be found here.

Once again, a big thank you to Kaleidoscope Home Entertainment!