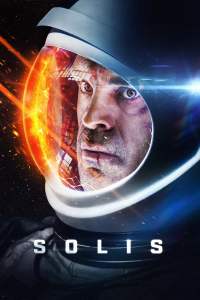 Solis is a 2018 Sci-Fi thriller written and directed by Carl Strathie and starring Steven Ogg (The Walking Dead) and Alice Lowe (Prevenge).

“When Troy Holloway (Ogg) wakes up to find himself trapped aboard a drifting escape pod shooting towards the Sun he quickly realises the true terror of his situation. With rapid oxygen depletion and a burn- up rate of 90 minutes, Commander Roberts (Lowe) leads a rescue party to save Holloway before time runs out.”

It’s worth mentioning right here at the start that Solis is very similar to the 2010 thriller Buried, starring Ryan Reynolds as Paul Conroy, a truck driver working in Iraq who wakes up buried alive in a coffin with only a lighter and a mobile phone.

On the one hand, Holloway has a lot more to do than Conroy in Buried which leads to a far more proactive lead character. He is also able to explore the immediate outside of his entrapment which is far more than we ever see in Buried.

However, Solis lacks the constant, suffocating claustrophobia of Buried which maintains an atmosphere of anxiety and unease. This is most notable during the opening 10 minute of the film where we are unaware of the scope of Holloway’s predicament.

Solis’s sci-fi setting also makes it harder to immediately identify and relate to Holloway and his space age jargon. My inability to comprehend and emotionally invest in his plight lead to a degree of dead space in the first half of the film for me.

The production design of the film is fantastic, the interiors of the shuttle look suitably futuristic yet worn, the suits are practical/ believable and the lighting is consistently atmospheric. Some of the exterior CGI is a tad shaky with the shuttle looking weirdly uncoloured and untextured but the solar flares and the star used for the finale look great.

Speaking of the finale… (No spoilers) I understand what the filmmakers were going for but I will say that I was maybe hoping for a little something more.

If you are looking for a single location, survival thriller but with a Sci-Fi edge then Solis is definitely the film for you.

SOLIS will be available on digital download from 10th December.