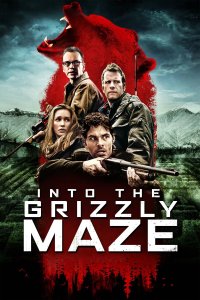 “When a giant grizzly bear starts attacking people in the Alaskan wilderness, a local law-enforcer heads into the maze to rescue his deaf conservationist wife. To make matters more complicated, his ex-convict estranged brother and a deranged vengeful hunter are also in the woods. Will any of them be able to escape the Grizzly bear known as The Red Machine?!”

To be honest, killer bears are not my favourite creatures. A lot of the films have oddly repetitive plotlines and feature many similar scenes (can bears really flip cars?) but there was one released this year that was a breath of fresh air. After waiting years for it to finally be released, Into the Grizzly Maze (formerly known as Grizzly, The Red Machine, Endangered etc.) was worth every second of the wait. The plot was original and complex and it was great to see so many storylines intertwine, with Thomas Jane looking for his deaf wife, James Marsden looking for his buddy and Billy Bob Thornton looking to kill the ferocious bear.

So many different aspects of the film work so well together. David Hackl’s direction is great. The writing is both funny and touching. The cast do a wonderful job. The characters are actually well-rounded developed people. The practical effects look gorgeous. The bear scenes are intense and energetic. The finale is satisfying and conclusive.

Perhaps the most interesting element in the film was to make Piper Perabo’s character deaf. What a brilliant way to increase the tension of the bear stalking scenes by having the victim be unable to use one of their primary scenes. The scenes playout fantastically and I was gripped on the edge of my seat bolstered by the beautiful cinematography and the perfect suited music.

It’s rare to have such a complete package but Into the Grizzly Maze was everything I wanted it to be and more. But perhaps the best praise I can give it is that it has actually made me more excited for upcoming killer bear movies.