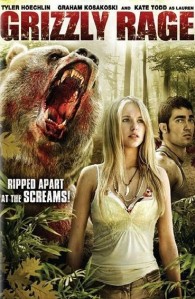 “Whilst on a camping trip in a secluded forest, four teenagers find themselves set upon by a toxic waste mutated Grizzly Bear. Will they be able to survive the mutated bear and its Grizzly Rage?!”

Grizzly Rage is a scaled-back feature which leans more to being a thriller than being a standard horror movie.

Simple is probably the best way to describe Grizzly Rage. First of all, there are only 5 characters in the entire movie, 4 of whom are human and one is a bear. There are no supporting cast, background extras or any other humans in the movie. To call this movie character focused would be an understatement.

There are also only 3 locations; a forest, a rock quarry and an abandoned cabin in the woods. Unfortunately, a lot of the run time is spent in these simple locations on events that have no real effect on the overall storyline such as Wes climbing the quarry, Sean exploring the cabin, fixing the car engine and Wes getting topless and climbing a tree. However the run time is swift 86 minutes and Grizzly Rage doesn’t overstay its welcome.

The plot is pretty simple as well. The four friends accidentally run over a bear cub and the revenge-crazy mama bear incessantly hunts them down. There’s a hint that the bears have been drinking from a lake that’s been polluted by toxic waste but it’s not made clear whether it has made the bears larger, stronger, smarter, more aggressive or had any effect at all.

Let me be clear, simple isn’t necessarily a bad thing and it’s not Grizzly Rage’s biggest problem. But there is one huge problem: the Mama bear is the protagonist and we should be following her story.

We are expected to sympathise and root for the humans but we can’t because they kill an adorable baby bear through sheer negligence and are largely unaffected by it. Instead they focus on themselves, at one point suggesting that they are being punished for previous bad acts. No, you are being punished for killing a baby bear and the Mama bear is understandably upset. This isn’t about you, this is about the bear. This isn’t nature run amok, this is humans run amok in nature and nature fighting back. Via angry bear.

As always, I adore the use of a real Grizzly Bear and Koda (despite being male) is great. Using a real animal creates real tension and shows some really dedicated film-making. For shots involving bear action and the actors, a man in a bear suit was used effectively. This was a wise choice as budget CGI works best when the tone is more tongue-in-cheek and the mood is more relaxed whereas Grizzly Rage plays it serious and tense.

Bizarrely, the ending is incredibly abrupt and confusing which unfortunately left me a little unsatisfied. I have read that Grizzly Rage originally ended differently with which although I don’t like from a narrative standpoint, it probably would have been more satisfying as a conclusion.

In other news, actress Kate Todd went on to be a successful country singer. Has yet to write a song about landing spine first on a bear trap, though.

It’s clear what Grizzly Rage wanted to be but it sadly falls short. Unfortunately, the film is largely uninteresting and doesn’t stand up to repeat viewings. I do love those remarkably unsuitable flaming title credits though…