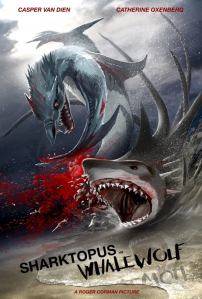 “When a genetically engineered wolf/whale hybrid goes rogue, it’s up to Sharktopus to put it down once and for all. But who will survive the outcome of the greatest battle in history: Sharktopus vs Whalewolf!”

Sharktopus returns for his biggest battle yet and it proves the most enjoyable thanks to interesting creatures, a funny script and some gung-ho performances.

Whereas other films foolishly attempt a degree of seriousness that can be detrimental to the finished product, Sharktopus vs Whalewolf maintains a cartoonish sense of humour. Sharktopus is frequently anthropomorphised, Whalewolf behaves like an ill-trained puppy, the dialogue is littered with gags and Casper van Dien’s hammy performance is tonally perfect.

What also differentiates Sharktopus 3 (as it’s known in Germany) is the sheer amount of creature action.

A lot of features try to keep their monsters hidden until a big finale or keep their activity to a minimum (just running or biting for example) which can be disappointing and unsatisfying. Undoubtedly due to director Kevin O’Neill’s long history as a VFX Supervisor, Sharktopus and Whalewolf get more screen time than most of the human cast.

I have spoken before about how quickly the audience gets accustomed to less-than-perfect CGI when they are exposed to it for a reasonable amount of time and SvW is a great example of this. The CGI isn’t great but the monsters have such great designs and are portrayed consistently that the VFX aren’t distracting or immersion-ruining.

Casper van Dien is terrific as drunk captain Ray Brady. It’s always great to see an actor or actress putting their all into a character and having such a great time doing it. He also bounces off his co-stars and really brings out their performances too especially his shipman Jorge Eduardo De Los Santos and love interest Akari Endo.

Also giving her all is van Dien’s wife, Catherine Oxenberg who stars as the creator of Whalewolf, Dr Reinhardt. I was eventually able to forgive her incredibly questionable German accent as her evolving relationship with Whalewolf becomes so bizarre and surreal that I couldn’t help finding it really engaging. I also really liked her overly sexy and impractically dressed nurse Jennifer Wenger and her portraits of her predecessors Eric Roberts and Robert Carradine.

Sharktopus vs Whalewolf is pure entertainment. It has such a love for its monsters and the cast are so dedicated that the atmosphere of fun is addictive. A great creature feature and hopefully not the end for Sharktopus.