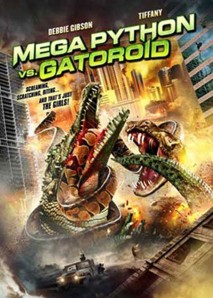 “When Dr Nikki Riley releases a rare species of giant Python into the Florida Everglades, Park Ranger Terry O’Hara feeds the Alligators experimental steroids to help combat the invading Python predators. However as both species continue to eat one another, the steroids cause uncontrollable growth until eventually the Mega Pythons and the Gatoroids become too big for the Everglades and turn their attention on the nearest cities. Now the former enemies must join forces in order to save Florida from their growing mistakes.”

Mega Python vs. Gatoroid is a 2012 co-production by the Syfy Channel and the Asylum directed by Mary Lambert (Pet Cemetery I & II) and is part of the current trend of ‘Creature vs. Creature’ based films. 80’s teen pop rivals turned creature feature queens Debbie Gibson (Mega Shark vs. Giant Octopus) and Tiffany (Mega Piranha) star as an eco-doctor battling a park ranger respectively with Kathryn Joosten and A Martinez rounding off the main cast.

When Dr Nikki Riley releases a rare species of giant Python into the Florida Everglades, Park Ranger Terry O’Hara feeds the Alligators experimental steroids to help combat the invading Python predators. However as both species continue to eat one another, the steroids cause uncontrollable growth until eventually the Mega Pythons and the Gatoroids become too big for the Everglades and turn their attention on the nearest cities. Now the former enemies must join forces in order to save Florida from their growing mistakes.

A rarity for the genre, all of the key creative players such as the director, screenwriter and lead protagonists are all women. Long established horror director Lambert adapts the story crafted by The Asylum’s regular writer Naomi L. Selfman (Mega Shark vs. Crocosaurus). The story starts off rather unfocused but manages to pull itself together for the surprisingly well thought-out finale, which includes possibly my favourite shot in any creature feature to date.

It is clear from the get-go that whilst the film-makers seem to accept and embrace the trashy nature of the film, they never try to move above and beyond just pleasing the target audience. MP vs. G is perfectly content to just cheekily wink at the audience and proudly wear its self-awareness badge. However this has been a problem that has plagued creature features in the post 00’s era, with Mega Snake, Python and Mammoth being just some of the examples of really enjoyable self-aware films that never dare to break away from their comfort zone of resting on their ‘we know we’re bad, but we’re enjoying it’ laurels. Whilst the story is certainly entertaining, it really stands out that the actions and intentions of the characters are completely devoid of logic and are reckless and single-minded. Neither character ever has a second-thought about the impact of their actions, outside of their own personal agenda.

The acting on the whole is actually pretty good for a creature feature, everyone involved seems to be having fun and not taking the whole seriously especially the two female leads and Joosten. And whilst the catfight sequence might be 100% fan services, it is the type of cheesy, well-intentioned, self-aware pandering that really benefits the tone of the film.

Debbie Gibson is actually one of my favourite science bitches [1] and once again, I found myself surprised at how endearing and relatable she was. Tiffany had the exact same effect on me. I really enjoyed her portrayal of O’Hara’s slight mental breakdown (following the death of her fiancée)when trying to convince herself she’s not crazy whilst injecting chickens with steroids. I think that the reason why I like the warring protagonists so much is because they are both imperfect characters who make terrible mistakes in the pursuits of sticking to what they think is right. I find that these character quirks really add some humanity to the characters, compared to the usual ‘final girl-esque’ main characters that creature features so commonly rely on. Michael Shanks in Mega Snake is exactly the same; whilst we root for his character we also accept his ability to routinely get drunk and upset women. It is the same with Gibson and Tiffany here, whilst they are doing untold amounts of damage to the Florid Everglades eco-system and getting a steadily increasing number of people killed, they are doing it to protect and save their opposing beloved species with a bizarrely psychotic motherly instinct. Thankfully, the two characters maintain their integrity and the battle is always more about saving the animals than defeating their former pop rival, until they both realize the gravitas of their actions and pull together to fix the damage they have caused.

Katherine Joosten (Desperate Housewives) is absolutely great in this film; the actress has fantastic comedic timing and continues to prove what a reliable talent she is with a fantastically animated performance. To begin with, her deputy park ranger Angie serves the purpose of being Tiffany’s lackey, helping her in her foolhardy scheme to bulk-up the alligators, but later on she works with the two leads and Diego to help save Florida. Another former singer, A Martinez (Curse of Chucky) stars as the real hero of the film Dr Diego Ortiz who keeps the story chugging along when the rather unfocused main story goes off on another tangent. Martinez is also the only character to really acknowledge the ramifications of what the two women are doing to the ecosystem and the first to come up with a plan of how to fix matters. As you have probably already guessed, Martinez is the serious straight-man but still brings enough enthusiasm to maintain the levels of fun and not ruin the trashy atmosphere.

Much like its spiritual predecessors, MP vs. G has the same quality of awful special effects as the Asylum’s Mega Shark films but actually implements the CGI an awful lot more with the audience getting a very good look at the Python and Gator designs pretty much from the get go.

Usually I’m the Asylum’s biggest critic and deplore their ‘mockbusters’ from their conception and intention to their production and release, but I find myself unable to not recommend Mega Python vs Gatoroid. The movie is fun, self-aware, funny and made for the fans, all of the qualities that the best CGI-sploitation films exhibit. I wish I could be nastier to this unfocused, trashy, cheap film which is an obvious attempt to capitalize on the current ‘Creature vs. Creature’ fad but it is entertaining, relatively well-made and honestly quite interesting. The set-up alone could be basis for a deeper, more thought provoking film about the relative morality and negative side-effects of human interference in regards to saving endangered species. But then again, where would the cream pie catfight fit in?

[1] A science bitch is a recurrent trope or convention within creature features; they are universally identifiable as blonde, pretty, skinny, stubborn, courageous and doggedly-determined scientists with a complete disregard for the consequences of their actions and whose degree of intelligence will vary depending on what the plot requires. Science bitches are available in both male and female varieties and can be found all over the world but predominately originate from the US.