Solis is a 2018 Sci-Fi thriller written and directed by Carl Strathie and starring Steven Ogg (The Walking Dead) and Alice Lowe (Prevenge).

“When Troy Holloway (Ogg) wakes up to find himself trapped aboard a drifting escape pod shooting towards the Sun he quickly realises the true terror of his situation. With rapid oxygen depletion and a burn- up rate of 90 minutes, Commander Roberts (Lowe) leads a rescue party to save Holloway before time runs out.”

It’s worth mentioning right here at the start that Solis is very similar to the 2010 thriller Buried, starring Ryan Reynolds as Paul Conroy, a truck driver working in Iraq who wakes up buried alive in a coffin with only a lighter and a mobile phone.

On the one hand, Holloway has a lot more to do than Conroy in Buried which leads to a far more proactive lead character. He is also able to explore the immediate outside of his entrapment which is far more than we ever see in Buried.
END_OF_DOCUMENT_TOKEN_TO_BE_REPLACED 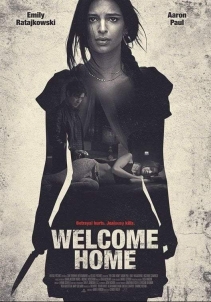 “Cassie (Ratajkowski) and Bryan (Paul) spend a weekend at a vacation rental home in the Italian countryside in an attempt to repair their relationship, but soon become victims of the homeowner’s (Scamarcio) sinister plans.”

Simplicity is the name of the game with Welcome Home as the main characters are the only ones we’ll be dealing with for 95% of the run-time. The movie really is as simple as a troubled couple being terrorised by a third party, whose intentions aren’t always clear or consistent. And whilst a larger plot is hinted in the final moments, it has little bearing over the actual events of the film and the re-contextualisation somewhat weakens the threat of the main villain.

END_OF_DOCUMENT_TOKEN_TO_BE_REPLACED

The Unseen is a 2017 psychological thriller written and directed by Gary Sinyor. The film stars Jasmine Hyde, Richard Flood and Simon Cotton and was produced by Magnet Films.

“Gemma and Will are shattered when their son dies in an accident. Gemma blames herself and starts to have panic attacks that affect her eyesight. Will, tormented, believes he is hearing his son’s voice calling out to him. To escape their grief, they take up an ex-pharmacist’s offer to stay at his Lake District country getaway but are his intentions entirely benevolent?”

Low budget independent horror is a mixed bag and requires a formula of simplicity, restraint and creativity that not every production can get right.

However I am happy to say that The Unseen nails it.

The shots are crisp, the lighting and music are atmospheric without being distracting, and the narrative moves along at a steady pace. Most importantly, The Unseen is a gripping thriller with sympathetic characters and a healthy amount of emotional rawness.

END_OF_DOCUMENT_TOKEN_TO_BE_REPLACED

“In a quiet countryside farmhouse, Britain’s vampires gather for their once-every-fifty-years meeting. Joining them are a detachment of Special Forces vampire killers who have bitten off more than they can chew. This is certainly going to be a night to remember… and for some of them it will be their last.”

It’s a great concept and the film certainly takes it’s time in establishing its interesting lore. Flemyng proves himself as a competent director, getting great performances out of his very talented cast. All of whom manage to lift the material to a more enjoyable level. The standout performance is from Tony Curran who stars as the caustic and impeccable dressed vampire, Peter Boniface.

END_OF_DOCUMENT_TOKEN_TO_BE_REPLACED

2013 has been an interesting year for films.

Creatures Features became a social media phenomenon thanks to The Asylum’s Sharknado which became a major talking point following it’s SyFy Channel première. Sharks were very popular this year as we also saw the release of Avalanche Sharks, Ghost Shark and Sharkzilla whilst Mega Shark vs Mecha Shark was pushed back to 2014. Announcements for 2014 included Sharknado getting a sequel entitled The Second One, Sharktopus getting two vs sequels and a crossover of the Lake Placid and Anaconda franchises!

Meanwhile the two parent genres of Creature Features, Sci Fi and Horror, equally performed far above expectations. The ‘Avengers Effect’ was finally proved as the box office gross for Iron Man 3 and Thor: The Dark World sky-rocketed from their last respective outings whilst James Wan hit a one-two punch with the super profitable Insidious: Chapter Two and mega hit The Conjuring.

But enough of that, on to my Best of 2013…
END_OF_DOCUMENT_TOKEN_TO_BE_REPLACED