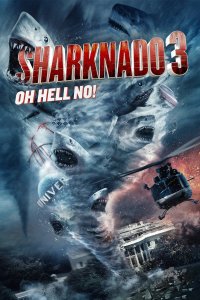 First it was California, then it was New York, now Florida and Washington D.C. are the next targets of a deadly Sharknado. Fortunately, this time April and Finn have some back up from their relatives!

Sharknado 3: Oh Hell No! faces the difficult task of being bigger, better and more insane than its predecessors and for the most part, it succeeds.

As per usual, Ian Ziering is great. His straight-faced unrepentant heroism and reckless martyrism make him a fantastic hero and the perfect lead for the shark-based campiness. Cassie Scerbo makes a welcome return as Nova whilst Tara Reid gives her strongest performance yet as (the now pregnant) April.

The opening is a lot of fun with Washington DC being struck by a sharknado whilst Fin receives a medal (and a golden chainsaw) from the President. It’s super entertaining to watch famous landmarks being destroyed by flying sharks and it felt fresh as the film-makers had (probably wisely) not attempted it with New York.