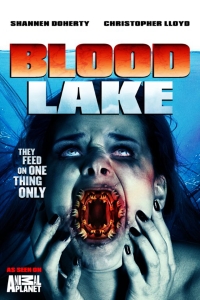 When lamprey start attacking the citizens of a quiet lake town, it’s up to Fish & Wildlife Ranger, Michael, to uncover the mystery surrounding their on-land assault. However, he must first contend with Mayor Akerman who is unwilling to take any drastic measures so close to tourist season….

Whilst the story isn’t overly original, the film hits all the right beats and the action is very well paced. The majority of the named characters have motivations and agency and on the whole, the acting is actually pretty good (Zach Ward in particular).

The cinematography is solid and it seems like a lot of thought was put into the shots as the majority of the framing looks great and the tracking is very professional. Blood Lake serves as an antithesis to shaky handheld camera work which so many low budget productions rely on.

There are even a few very interesting flourishes including the inside-the-bucket shots and a fantastic moment where Nicole trips whilst fleeing the Lamprey horde and the camera just flows over her body.